15 AMAZING THINGS TO DO IN VENICE ITALY

1/ RIDE A GONDOLA AROUND THE CANALS

Gondolas glide smoothly over the shimmering water next to the private water taxis that cruise up and down the canal looking for tourists willing to pay their exorbitant fare. A goods boat pulls up alongside the dock of one of the canal-side hotels and the driver unloads some daily supplies.
Boxes of fresh eggplant, fresh limes, juicy plums, yellow capsicum, and bright red tomatoes are placed in crates on the dock. From the water on a Vaporetto or gondola, the houses, palaces, and romantic bridges that line Venice’s canals seem to rise out of the mist and fog like apparitions floating on a cloud of water.
The cold misty fog seems in keeping with Venice’s elegant decaying palaces, romantic bridges, and a maze of narrow twisting alleyways variously known as called, palisade, and ruge.
These are some of the sights you can expect to see while gliding around Venice in a gondola.

2/ FIND A VIEW OF THE GRAND CANAL

There are amazing views of the Grand Canal from many vantage points throughout Venice, including its bridges and grand hotels. Many of the city’s grand hotels were former residences of the wealthy and palaces for the noble families, so it’s a good chance you’ll find excellent views of the Grand Canal in a luxury hotel. One such place is the Foscari Palace Hotel, which was once a sumptuous Venetian palace. You could easily pretend to me that you’re a visiting noble staying at the mansion of a wealthy Venetian cousin. Tall ceilings, velvet drapes, and French doors with patterned glass panels create a feeling of opulence. Throw open the French doors to your suite and the activities on the Grand Canal is a picturesque scene below. Opposite the hotel, money changes hands as shoppers laden with fresh produce from the markets queue up for the short ride across the canal in one of the plain wooden gondolas.

3/ WALK THE STREETS OF VENICE 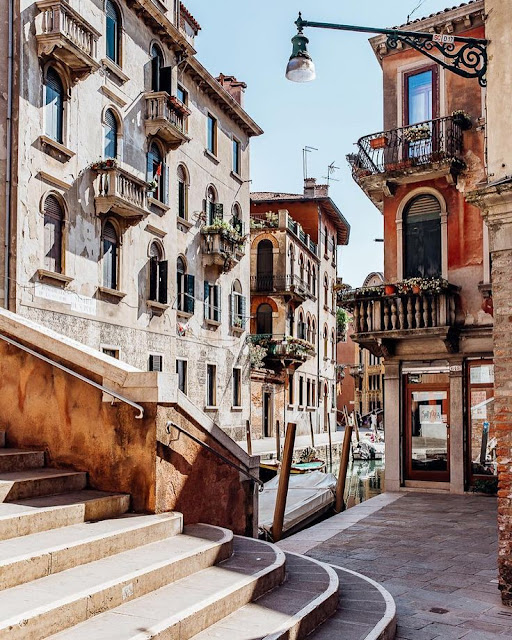 If you walk the streets of Venice aimlessly, you’re guaranteed of finding a new delight around every corner. The aroma of Italian herbs and spices waft from the many cafes as people tuck into gelato and pasta. There’s plenty of good food to eat in Venice for all palates. You can avoid paying high prices for a delicious meal if you look for restaurants and cafes away from the busy tourist spots. There are some excellent recommendations in this guide to finding good food in Venice. A cavalcade of gondolas stream by, some with couples enjoying a romantic ride and others packed with tour groups snapping away at the moving scenery. There are stands selling colorful masks and trinkets, shops with pretty glassware, fine silk-ties, delicious cookies, and local wine. You’ll want to browse through every shop and buy as many trinkets as you can carry. Gondoliers sit by the side of the canal, basking in the sun while masked buskers in gaudy Venetian carnival outfits entertained tourists along the sidewalk. 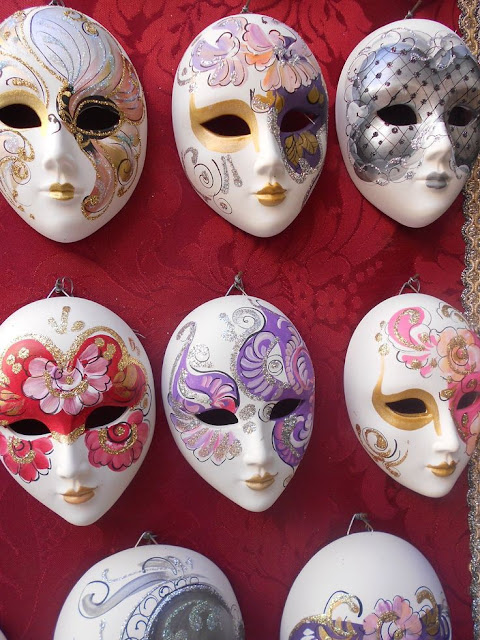 Often, right in the middle of a courtyard, the romance of Venice overcomes a visitor. Putting on a colorful carnival mask, he might fall to his knees and propose to his lady. The windows of the shops are filled with elaborately decorated paper mache and leather masks of all colors, shapes, and sizes. Masks have always been a central feature of the carnival since 1268. The masks of Carnevale personify Venice, a fantasy city whose real life is hidden behind a tourist veneer and hardly ever revealed to strangers. To keep up with the demand, mask makers (mascherari) working in artisan’s studios called laboratory, toil year-round to produce elaborate handpainted fantasies decorated with gesso, gold leaf,  natural feathers, and gems. You can see them working in their studio-shops in the neighborhoods of San Palo and Dorsoduro. Traditionally masks were used to hide the wearer’s identity and social status, so Carnevale was a time for fun, but also obscurity. As no-one can recognize you beneath your mask, it was an opportunity for illicit dalliances and the breaking down of social barriers.

The classic beauty of Piazza St Marco’s is spoiled by the myriads of t-shirt and souvenir sellers. Masses of pigeons flap around the tourists, landing on their arms and heads. The reactions of the people are fun to watch. They either scream and jump around flapping their arms in fright or stand as still as a statue with their arms raised towards the sky. While visiting the piazza, make sure to marvel at the beauty of the 11th-century Italo-Byzantine architecture of St Mark’s Basilica.

Combine a guided tour of St. Mark’s Square and the Doge Palace, two of the city’s most well-known attractions, The Doge’s Palace was the residence of the leader of the Republic of Venice. Inside, see the Chamber of the Great Council, courtrooms, living quarters, secret rooms, and exquisite frescoes. There’s also an impressive armory room. The Bridge of Sighs links the New Prisons to the Doge’s Palace.

7/ GET LOST IN THE BACKSTREETS 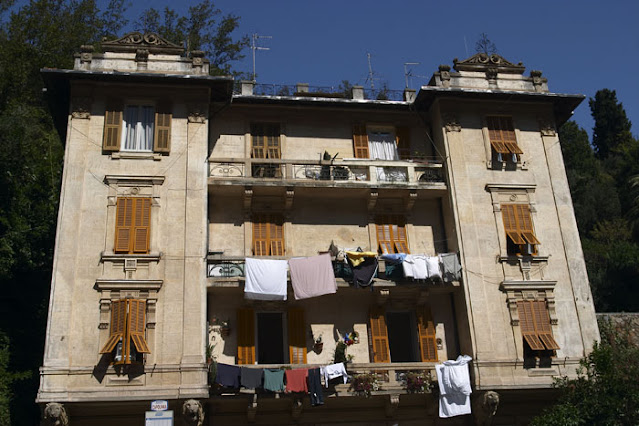 As you walk around Venice, you might find yourself slipping away from the main tourist area. The back streets of Venice are where charming shops are replaced by moss-covered walls and musty odors of Venice’s back canals. Wrinkly apron-clad grandmothers peer past paint-peeled windows frames while rows of washing flap from the windows above your head. The sun begins to disappear behind the buildings and darkness slowly descends upon these narrow lanes. Your heart beats a little faster as you realize you are lost but it’s all part of experiencing the charm of Venice. You walk for hours until you somehow find yourself back on the main canal. 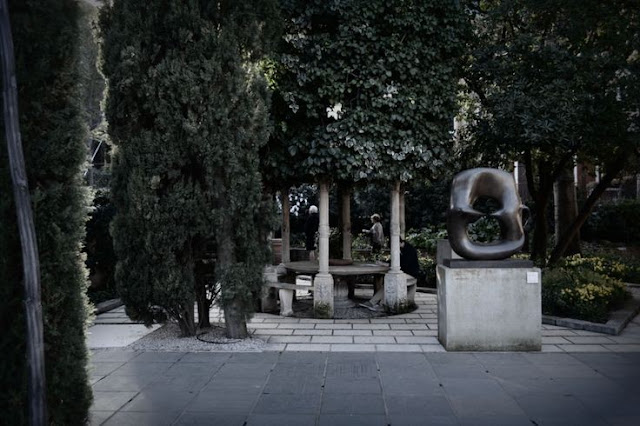 The Peggy Guggenheim Collection on the Grand Canal is a collection of modern art worth seeing. The collection is varied, from Picasso to Pollock and a range of styles including Cubism, Surrealism, and Abstract Expressionism. Located in Palazzo Venier dei Leoni, an 18th-century palace works in the museum represent artists from Italy and around the world.

Glassmaking is Venice’s second-biggest industry after tourism and the best glass originates from the island of Murano. You’ll be astonished by the talent of the glassmakers who demonstrated their craft.
In a few deft movements, an artisan can magically create a delicately sculptured horse out of a shapeless lump of hot glass. Venice’s glassmaking history is believed to date back before the first millennium. By 1291, due to the many fires caused by the glasshouses’ constant need for high heat, the Council of the Venetian Republic moved all glasshouses to Murano. The tradition has continued up until today where some of the worlds finest glass products still originate from this small island. The Signoretti le Bricole factory is a favorite of actor Nicolas Cage and is best known for its chandeliers that hang in lobbies of grand buildings all around the world.

10/ VISIT THE LACE SHOPS IN BURANO 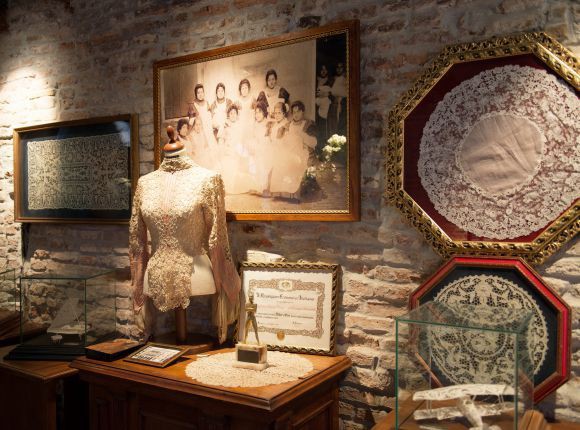 Burano’s canals are filled with brightly colored buildings, lace shops, and cafes. In the 16th century, it was traditional for the women of Burano to work on handmade lace creations while waiting for the men to return from the sea. Burano lace became highly sought-after throughout Europe. Although the more expensive creations in Burano’s lace shops are genuine Burano-made lace, watch out for the cheaper lace items imported from China.
11/ LUNCH LIKE THE RICH AND FAMOUS IN TORCELLO 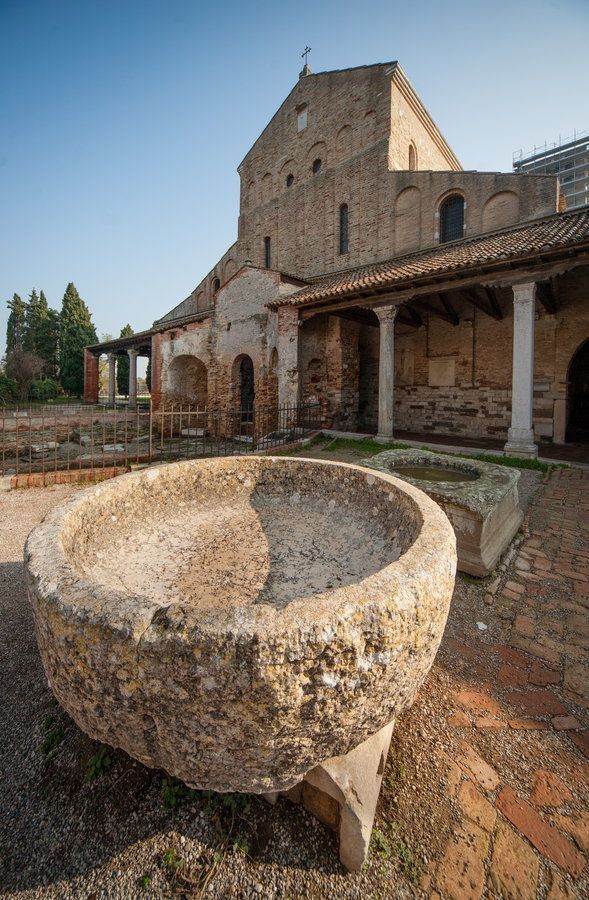 At the island of Torcello, having lunch at Locanda Cipriani, a rustic guest house and well-known restaurant is a treat. The Bellini cocktail, which a deliciously refreshing concoction of champagne and peach juice was invented right there in Torcello by Giuseppe Cipriani. The Cipriani name is legendary in Venetian circles and is linked to the world-famous Harry’s bar. Locanda Cipriani hosts celebrities who just want to get away from the Venice crowds. Thumb through their guestbook and you’ll find Nicole Kidman’s sprawling signature. This unassuming rustic hideaway boasts a long list of celebrities from Charlie Chaplin to Winston Churchill, many of Europe’s royal families, Prince Charles, the late Princess Diana, Elton John, and you.

12/ TAKE A PHOTO OF RIALTO BRIDGE

Venice is known as the city of bridges, with over 400 that connects the Venetian archipelago. You could spend days wandering across all of these bridges while exploring the back lanes and canals.
If there’s one bridge you shouldn’t miss that would be the Rialto Bridge. The bridge was constructed in 1588 and is the spot to snap a selfie as it has a great view of the city.

A half-hour cruise in a Vaporetto from San Marco will land you on an 11 km sandbar. Lido Island is a haunt for writers and film buffs. An exciting time to go to rub shoulders with the stars is during the Venice Film Festival each September.  Hotel Riviera is where many famous writers escaped penning their best works, including Ernest Hemingway and Lord Byron. This is also where Death in Venice was written in 1912 by German author, Thomas Mann.


Venetian textiles have a long and rich history, so while in Venice it makes sense to visit a textile house. Rubelli has been producing textiles since 1889 and makes some of the world’s most lovely damask. Their textiles are sought after by internationally renowned designers like Roberta di Camerino. So pop into their showroom and see one of the beautiful things that Venice is famous for. 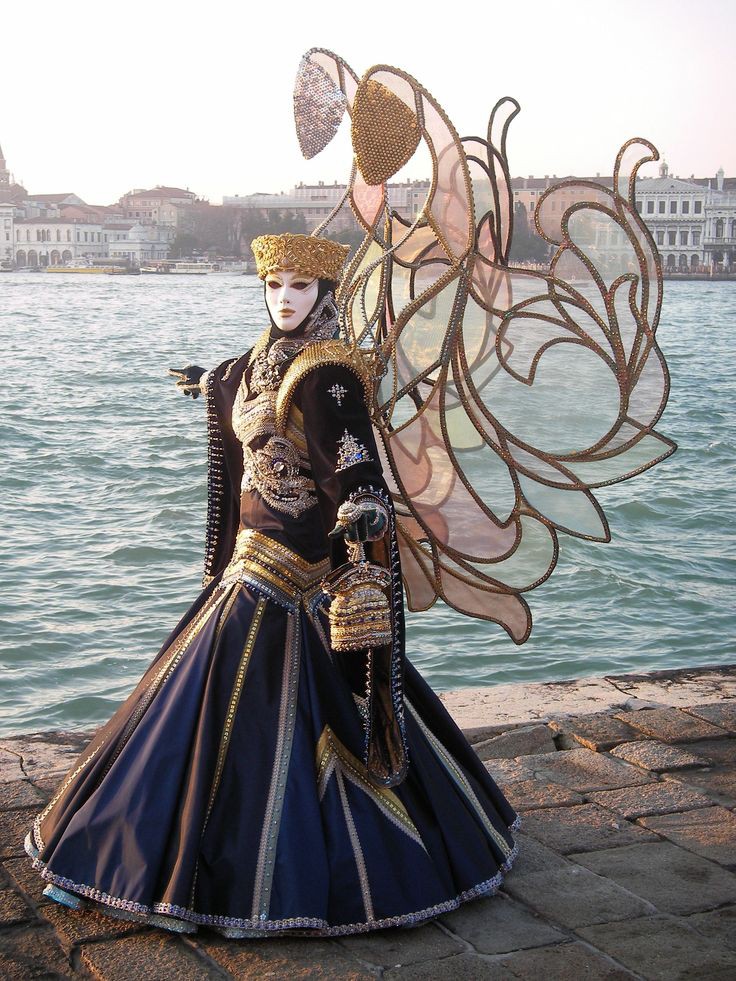 Venice is like a stage and the triangle between Rialto, San Marco, and Accademia like a revolving play but never more so than during the celebrated Carnevale. During this 10-day street party, costumed revelers fill the city’s streets but the center of activities is Piazza San Marco. Carnevale is a time for dressing up and enjoying dance, mime, theatre, opera, and parties.
Before Venice became a region of Italy (in 1866), it had the most luxurious court in Europe and the wild celebrations of Carnevale went on for months at a time. What many don’t know, however, is that for nearly two centuries, from 1798 until the 1980s, Carnivale was banned under Fascist rule.  The pre-Lent celebration begins each year two Fridays before Ash Wednesday, finishing on Shrove Tuesday, the day before Ash Wednesday. Even if you can’t visit Venice during Carnevale, you’ll still get the feel of the event in the many mask shops which grace the city. Carnevale takes place in Venice each year in winter, which is the best time to see Venice.

When to visit Venice

Venice is indeed one of the few places that can claim to be more beautiful in winter than in summer. While most cities are at their worst in winter, Venice is at her most atmospheric and magical. Cloaked in mist and fog Venice wears her wintry cloak like a grand dame dressed for the opera. When the tourist throngs thin out to provide near uninterrupted views of Venice’s visual masterpieces, you can stand in Piazza San Marco and marvel at the magic of Venice. It’s still one of the world’s greatest drawcards and the good news is, Venice hasn’t sunk – it’s better than ever.

Where to stay in Venice