Goa is a state on the southwestern coast of India within the region known as the Konkan,
and geographically separated from the Deccan highlands by the Western Ghats. It is surrounded by the Indian states of Maharashtra to the north and Karnataka to the east and south, with the Arabian Sea forming its western coast. It is India's smallest state by area and the fourth-smallest by population. Goa has the highest GDP per capita among all Indian states, two and a half times that of the country.It was ranked the best-placed state by the Eleventh Finance Commission for its infrastructure and ranked on top for the best quality of life in India by the National Commission on Population based on the 12 Indicators.

When you think of India’s beaches, you think of Goa! And they really do not disappoint. Long stretches of golden sands, emerald oceans and all fringed by picture perfect coconut palms- this place really is the dream you always imagined. Goa is not only the perfect holiday destination for beach bums, but it also offers a whole heap of amazing things to do and see. If you’re planning a trip to the coconut state, make sure you check out each of these 15 must do

Once upon a time, back in the late 60’s, Anjuna was the gathering point for hippies visiting
India’s coast line. Nowadays, it’s filled with trance ravers and domestic tourists, and there are far better beaches elsewhere. But the wonderful Anjuna flea market is definitely worth a stop by. Taking place every Wednesday in South Anjuna, the market sprawls a huge area, leading down to the sea. It’s filled with handicrafts, second hand clothing, jewellery, beautiful patchwork backpacks and fabrics from almost every part of India. Arrive early in the day to beat the crowds and avoid the heat!

2. Take a day to marvel at the Portuguese flair and stunning churches of Panjim and Old Goa

Goa was once a Portuguese settlement, and today, many remains of the past can be found up and down the coast. Most notably, with the huge churches you’ll find in Old Goa and Panjim, Goa’s lovely capital. It’s well worth taking a day away from the beach to see these beautiful buildings, which are very well preserved and offer a glimpse into some colonial history. Panjim can be easily reached on a day trip from many of Goa’s beach towns, and Old Goa is a short bus ride away.

3. Get your hippie on at Arambol beach

Each of Goa’s beaches has a different personality, and each cater for a slightly different crowd. Our pick of North Goa’s busier resorts is Arambol, a mecca for backpackers and soul seekers from around the globe. Although not the quietest beach, there’s so much to do here, and so many people to meet it more than makes up for the crowded sands. Check out some of the great international cuisines, join some other travellers for a game of volleyball or walk up the cliff side for epic views of the beach below.

4. Swim in the fresh waters of Sweet Water Lake

Not far from Arambol beach, behind Sweet Water Beach is the blissful Sweet Water Lake, a fresh water lagoon perfect for a peaceful afternoon swim. To get there, walk around the cliffside to the North of Arambol beach, and then keep asking shopkeepers for the lake! There are sun beds around and a place to get a few cold drinks. A perfect way to spend an afternoon!

5. Feast on South Indian Cuisine- Dosas, Uttapam and Goan Thali can be found at any traditional restaurant

One of the highlights of India is the delicious food! And South India’s cuisine is a real must try for anyone visiting Goa. Delicious Thali plates can be found in most beach towns, and for a smaller meal try a Dosa or Uttapam, some of South India’s traditional breads. Of course that is all best washed down with a banana lassi or masala chai!

6. Stay in a colourful bungalow on the beach

You’ve got a great range of accommodation options along the beaches of Goa- but there’s honestly no better choice than a brightly coloured bungalow with a sea view! These can be found in almost any beach town, and in off-season expect to pay from 300 rupees a night (from 800 in season).

North Goa is about parties, busy resort towns and eccentric markets, but beautiful South Goa is all about chilling out on golden sands. Palolem Beach is the centre of South Goa’s tourist scene, but we recommend heading to Agonda or Pantem beach, both long and gloriously quiet stretches of sand, with all the conveniences and accommodation options you need, but without the crowds of Palolem Beach.

8. Visit one of the states many old forts and admire the views of the Indian ocean

Up and down Goa’s coast line are a number of huge old forts in varying conditions. Even if they are a little battered and falling to pieces, each offers spectacular views over the Indian Ocean and Goan countryside. Some of our favourites are the Cabo de Rama fort in South Goa or Chapora Fort in North Goa.

9. Hire a motorbike and drive through coconut palms to secret beaches 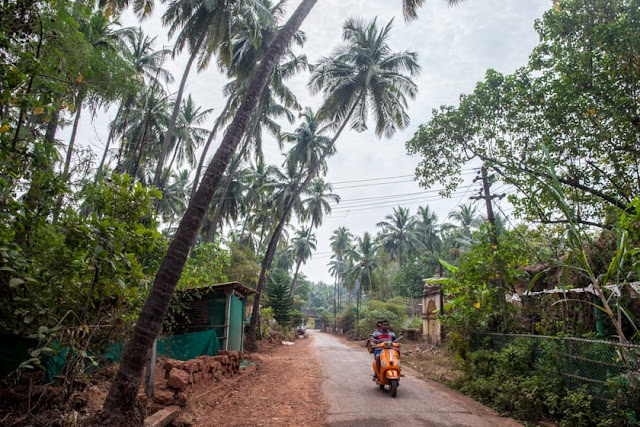 The best way to get around Goa is by motorbike, and you can easily hire one at any beach resort anywhere in the state. Grab yourself a road map and get exploring! There’s so much to see, from secret beaches to old churches and spectacular countryside. The roads around the coast are generally quiet and well paved and scooters can be hired anywhere from 250 rupees a day.

10. Get off the beaten track, awake early and watch local fishermen bring in the days catch

Seafood is everywhere in Goa, but if you want to see where it comes from awake at dawn and head down to one of the states many fishing beaches. Here you can see the local men pull in the day’s catch from rainbow fishing boats onto the white sands. I found the men to be some of the friendliest people I met in the whole state, and they were really happy about my curiosity for their life work. If you are staying in North Goa, check out Baga Beach for the colourful harbour pictured above.

11. Try some yoga at one of the many schools up and down the coast

One of Goa’s favourite past times is Yoga in all its forms! You’ll find an abundance of yoga schools offering everything from beginner classes to 300 hour teacher training courses. Many of the schools charge a small fee for classes and some offer free meditation. It’s a great way to stay fit and move your body a little after all that sunbathing!

12. Try some of the amazing selection of vegan, raw, healthy food restaurants

Goa has become a bit of a mecca for hippies, yogi’s, trance ravers and beach bums alike, but the raw and vegan health food scene is also booming. There’s so many delicious places to try a bowl of superfood almond porridge, raw chocolate balls or vegan ice cream. Even if you’re not into vegan food, you might be surprised how delicious some of these places really are! We recommend Bean Me Up in Anjuna, Shantaram in Arambol and The Space Goa just outside of Palolem.

13. Spend some time getting to know the relaxed, always smiling Goan people

Everyone will tell you that Goan’s are a unique breed of Indian, and that couldn’t be more true. Goan’s are friendly and very relaxed. Get to know your guesthouse owner, or the family who run the little Dosa shop down the road, you’ll be endlessly rewarded!

14. Watch the sunset each and every night

I’ve seen some amazing sunsets around the world, and I still think Goa’s are some of the best. The sky turns a misty gold, and the waters perfectly reflect that. It’s the best time for a lazy dip in the ocean, a casual game of football with some locals or a Kingfisher shared with friends. I guarantee your mind will be blown each and every evening!

15. Chill the heck out, for that’s what Goa does best!

There’s so much to do in Goa, but what Goa does best is… well nothing at all. Laying on a sun bed under swaying coconut palms and dipping in emerald waters is what this little state is all about!